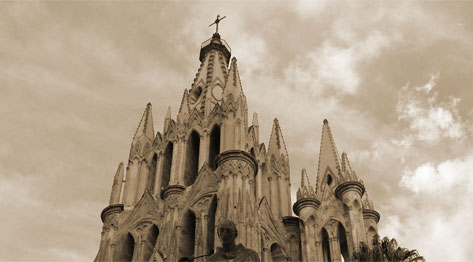 However, war had concurred with the decrease in production of local silver mines and San Miguel began a period of decline. Its population decreased and its elegant churches and mansions fell into ruin.

It was not until the XX century that San Miguel became known as a center of Fine Arts. A first school of Fine Arts was founded in the third decade of the twentieth century, and the fledgling artistic colony of San Miguel de Allende soon obtained worldwide recognition.

This was further strengthened in the fifties, when Allende Institute was founded. This attracted war veterans who were granted scholarships by the United States government. This peculiarity of the colonial site began to seduce writers and artists at the beginning of San Miguel’s rebirth.

In 1982, under a Presidential Declaration, 68 blocks of San Miguel Historical Center were declared Historical Monuments Area, contributing to the restoration of old buildings and preservation of the colonial environment.

Nowadays, San Miguel de Allende is still known for its elegant colonial atmosphere and its growing community of artists, but also has became popular as a first-class vacation destination and retirement community.