San Miguel de Allende, the Heart of Mexico, is located north of the beautiful state of Guanajuato, considered Forge of the National Independence and birthplace of illustrious men. This city is a colonial jewel distinguished by the warmth and generosity of its people. Its historical, cultural, architectural and gastronomic richness has astonished multitudes over the centuries, and has made of this Mexican city one of the most recognizable places in the world. 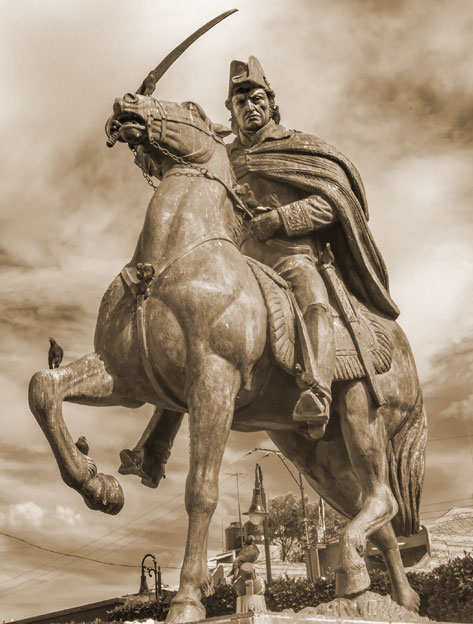 The World Heritage Site designation was granted by UNESCO in 2008 to the Historic Center of San Miguel de Allende and its Sanctuary of Jesus of Nazareth in Atotonilco, a San Miguel rural community located 15 minutes north on the road to Dolores Hidalgo. This place is considered one of the most beautiful churches in all of Mexico, and is considered the Sistine Chapel of the Americas. Its majestic frescoes are attributed to Luis Felipe Neri de Alfaro, an important clergyman and promoter of religious art, and the artist Antonio Martínez de Pocasangre, a Queretaro-born painter of Creole origin. This man painted the Passion of the Christ on the building ceiling and enriched it with poems by Alfaro. This artistic and architectural treasure also witnessed the passing of the glorious Insurgent Army leaded by Father of the Nation Don Miguel Hidalgo and the prodigal son of this city, Don Ignacio Allende Y Unzaga. Here they took the banner with the image of the Guadalupe Virgin, a symbol that motivated Mexican people to fight against Spanish rule and functioned as an informal first flag for independent Mexico.

Around this area you can also find a variety of hot spring spas: the perfect place to achieve a state of relaxation, peace and coexistence with nature. This important reason is the best excuse to enjoy a pleasant and unparalleled stay in a magnificent colonial environment, which surely will make you feel time has stopped.

One of the important alternatives that art connoisseurs have in this city is the chance to attend any of the cultural festivals that take place throughout the year. This festivals are recognized worldwide for the quality with which they are developed. Some options are Guanajuato International Film Festival, International Music, Jazz and Blues Festival, Puppets Festival, Writers and Literature Festival, Calaca Festival, Cuban Culture Festival, among others. Traditions and popular festivities are another important attraction of our town, and the religious fervor of its people impresses both locals and strangers. Among the most important local festivities are the feasts of Patron Saint San Miguel Arcángel, The Holly Cross, The Lord of La Conquista, the Convite de Locos (“Madmen Parade”) and the National Festivities in September.

Undoubtedly, we can not overlook the fascination our good taste and diversity of culinary styles has aroused among many people, increasing the fame of our city. When walking through its cobbled and colorful streets you will find restaurants offering Mexican, Italian, Latin - Asian, international, Creole-Cajun, French, fusion, seafood, just to mention a few of them. All of this restaurants offer a high quality cuisine that will please even the most demanding tastes. We offer the creations of nationally and internationally recognized chefs who have fallen in love with San Miguel and have taken this magical city as their residence. As a complement, you can not miss an exquisite dessert while you admire the sunset.

Another recommendation is to get acquainted with the San Miguel nightlife, starting with the Estudiantina (student chorus), its traditional alley walks and its unique masquerade. This event is framed by the imposing Parish of San Miguel Arcángel, a symbol that represents the architectural heritage of our past that makes us proud of the present.